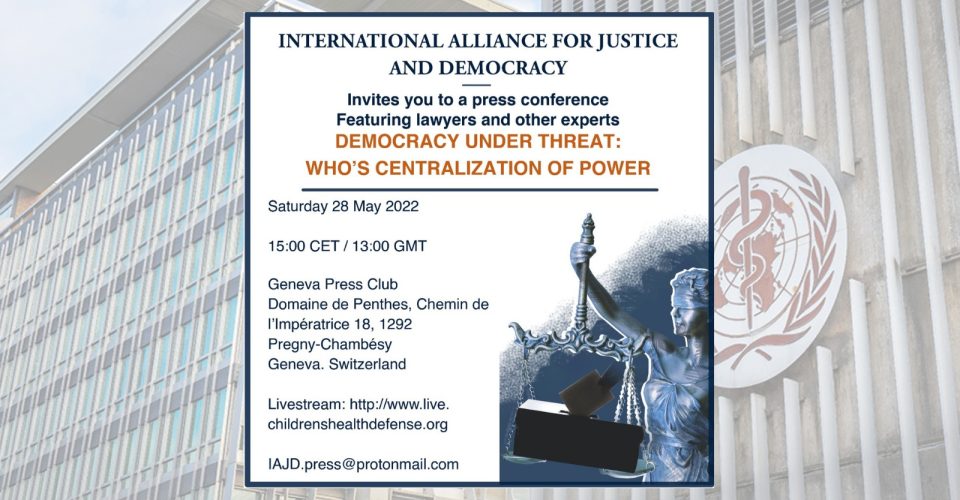 Children’s Health Defense Joins A Press Conference Hosted by International Alliance for Justice and Democracy to Expose WHO’s Attempt to Foster a “One World Government” in the Name of Public Health.

The press conference aims to bring full transparency to legal matters by a group of independent legal experts and other professionals addressing WHO’s ambiguous procedures and plans in conflict with the principles of national and individual sovereignty. This serves as a call to action for national and global decision makers, legal experts, and concerned citizens worldwide.

The International Alliance for Justice and Democracy is a group of legal experts who convened due to concerns about the deterioration of Human Rights and democratic procedures observed over the past few years.

As the governing body of the WHO, the WHA is currently meeting to discuss proposed amendments to existing International Health Regulations (IHR) from 2005. These regulations, intended to serve as the foundation of a pandemic treaty, would foster a “one-world government” in the name of public health. Representatives of 194 nations, including the U.S., will soon decide whether to grant the WHO the authority to manage future pandemics globally, including the power to sanction countries that don’t comply.

CHD.TV will live-stream the press conference beginning at 9:00 am ET and the replay can be viewed on CHD.TV. Polly Tommy (CHD.TV) and Catherine Austin Fitts (Solari Inc.) will serve as moderators.

These amendments would enable the WHO to declare a public health emergency unilaterally. For U.S. citizens, an unelected official could declare a public health emergency, allowing the Centers for Disease Control and Prevention (CDC) to detain, examine, and potentially medicate Americans suspected of illness. The WHO would gain the authority to introduce surveillance systems, compliance measures and implementation of medical response worldwide, violating the inalienable rights of individuals and the sovereignty of nations. It would remove both transparency and accountability as the WHO is immune to every form of legal process.

FLASHBACK: Ukrainian Journalist Files Complaint To Force Investigation Of US Ambassador Yavanovich And Her ‘Orders’ To Ukrainian Prosecutor Lutsenko

Why Is Secretary Austin’s Staff Lawyering Up With Criminal Attorneys?

BREAKING: NIH Warned Vaccine-Injured Mom Not To Vaccinate Her Children In March

The Prerogative Of The Harlot

Prediction And Encouragement For The Year Ahead –

Mastering the Future: The Megalomaniacal Ambitions of the WEF

A Sailor’s Reflections On Race And The Navy

Who’s Running The World? 8 Takeaways From This Week’s WEF Meeting

Subscribe to our evening newsletter to stay informed during these challenging times!!